While doing further research on illegal immigration I found this video on immigration from Beck back in 2006. 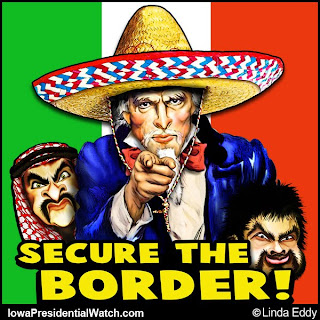 Apparently when a study is done and the results don't fit the liberals picture perfect utopian agenda they label the truth as "extremism" because it doesn't support their calls for allowing illegal immigrants to overrun our country or there agenda to have undocumented democrats workers aid in Obama's reelection.  Many of the hispanics today are unwilling to assimilate into our society or contribute to our society as fully functioning individuals but instead would have us conform to their culture.  Well, ya know, if I wanted to join in their culture then I would move to Honduras or Mexico, but I don't.  Those people who immigrated here in the past were more than willing to and in fact did assimilate and contribute to our society and work with the citizens who were already residing in America but that isn't the case with this wave of immigrants today.  But, these seem to be a guiding staple of the Democratic Party - keeping individuals reliant on the government as well as adhering to the principles of nonsensical jibberish.  These backwards minded individuals just wouldn't have the capacity to know common sense principles or logic even if it was 2 inches away from their faces.  Liberals and anyone else who want to allow people to cross our border and ignore the rule of law and American sovereignty are for anarchy and against having the right to national borders and this country having a right to enforce its laws.  This crap has got to stop!!  Our federal government must do its job and enforce the borders.

FAIR an organization that has been labeled as "extremist" by the Left for revealing the true costs of illegal immigration.  FAIR just recently released their findings of a study that they conducted on the fiscal burden that illegal immigration has on taxpayers.

Here are there key findings:

Illegal immigration costs U.S. taxpayers about $113 billion a year at the federal, state and local level. The bulk of the costs — some $84.2 billion — are absorbed by state and local governments.

The annual outlay that illegal aliens cost U.S. taxpayers is an average amount per native-headed household of $1,117. The fiscal impact per household varies considerably because the greatest share of the burden falls on state and local taxpayers whose burden depends on the size of the illegal alien population in that locality


Education for the children of illegal aliens constitutes the single largest cost to taxpayers, at an annual price tag of nearly $52 billion. Nearly all of those costs are absorbed by state and local governments.


Most illegal aliens do not pay income taxes. Among those who do, much of the revenues collected are refunded to the illegal aliens when they file tax returns. Many are also claiming tax credits resulting in payments from the U.S. Treasury.
Posted by Teresa at 9/08/2010 07:33:00 PM

Thanks for the great information. Beck looked like a kid.

I would like to see a big fence and a big bus.

You're the BEST... That was a great post, factual, informative as well as funny...

I can use that 1000 myself around the house ya know? I'm sure you all can too.

Teresa: "Many of the Hispanics today are unwilling to assimilate into our society"

Yup.. and don't we know it here Chicanocago? Wheeling next door is like a trip over the border as is the west side. Daley's gift to us.

Great post. Now you can be labeled a bona fide racist along with the rest of the sane in this nation.

Right on the money, girl.

Love the video Teresa. It shows just how incapable we are handling illegal migrants. This country doesn't have the stomach to do the right thing, even thought the cost to the taxpayer is overwhelming. Great article!

Have you noticed that in reporting the day laborer killed by police in LA, he is said to an "immigrant." No where does it say he is legal, or illegal. I did read that he has been here for 6 years, but if he is still in the day laborer market he probably doesn't have i.d. to get a permanent job - and the press is trying to keep it quiet.