Stacy McCain is Right - Rick Santorum: "This is the little engine that could campaign"

Glenn Reynolds is dreaming in the land of Oz when he predicts that Rick Santorum will be the next candidate in the GOP field to drop out.  Santorum has some of the most ardent supporters who are willing to back him the whole way to the White House.  Stacy McCain is correct in his analysis.  Rick Santorum is riding on the bump which he received, and continues to receive from both his masterful debate performance and his unexpected fourth place finish in the Iowa Straw Poll.  It was quite unexpected for Santorum to do that well in the straw poll.  Pro-life Catholics and anti-Jihadists are probably Santorum's most ardent supporters, we are very loyal to him and aren't about to abandon Santorum for some other lesser candidate at this point in time.  Rick Santorum keeps on chugging along, working his hardest with a small amount of funds, relaying his message of liberty, religious freedom, economic policies to boost the economy, foreign policy agenda, immigration policy (specifically illegal immigration), and his staunch pro-life message to the American people.  Stacy rightly points out that Rick has even seen an uptick in online donations since last Thursday's debate.  He is gaining momentum so there is no reason for Rick Santorum to hang it up at this stage in the presidential race.  Now I'm not sure whether Newt Gingrich is going to be the next candidate to drop out of the race as Stacy predicts but it is certainly possible with all of his previous campaign troubles.  I think the next GOP candidate to drop out could be either McCotter or Huntsman.

Here is Rick Santorum's exchange with Ron Paul on Iran:

Every innocent human life is precious and Rick Santorum understands this as evidenced by his answer to an abortion question during the debate.

To display that his campaign is gaining momentum Rick Santorum has released a video touting his 4th place finish in the Iowa Straw Poll.

This was a great campaign description by Santorum. He said, "This is the little engine that could campaign". 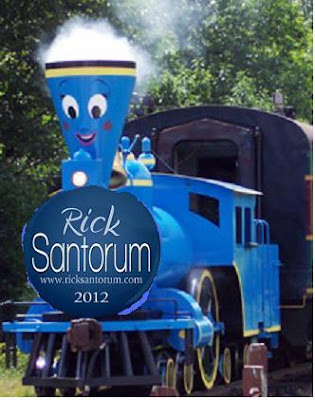 I like Rick and in a perfect world I could support him, but honestly I see no path to the nomination for him. I will however, give him "A" for his strong positions--he sticks to his guns.

He seems like a decent guy, and seems like he's pretty willing to defend what he believes.

I'm still going to take the ideologically consistent, 12-term congressman over him, but y'know...to each their own. ;)

My beliefs are closely aligned with Rick's beliefs, more so than any other candidate in the race so he has my unwavering support. I like both Rick Perry and Michele Bachmann also. Unfortunately, he isn't getting much national name recognition or media coverage highlighting all of his accomplishments while he was in the Senate.

Thank you. :)) To my very great happiness, I'm going to be able to vote in the general election this season...sadly, I won't be old enough to vote in the primaries. :( Oh well. Campaigning is something I can do, and I agree with Ron Paul on foreign policy issues...but I bet you guessed that. :D

It's too early to call a front runner for the GOP. One thing I hope we don't do is let the media pick our candidate for us.

I like his views on the social issues. I think he would make a great VP. I just don't see him raising the money needed to get the nomination.

Rick Santorum is among my favorites.

I think he would be good for America, I have three favorites, Mr. Santorum, Mr. Cain and Mrs. Bachmann.

Now if Allen West decides to run, he's my number one pick.

I like Rick Santorum, too. I was happy to see he did so well in the Iowa straw poll. I wish him luck and hope he begins to get the attention he deserves.

I really like Santorum. He is the most solid of all the candidates. Too bad nobody cares. I'll vote for whomever is the nominee. Don't know yet who I will support for the primaries. Rick will always be on my list, but I don't think he has a chance. Shows how shallow we are, and how unserious we are when we say we want conservative.