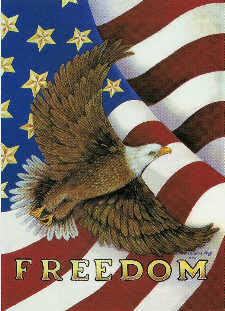 The past few weeks I have felt sooo tired. It is probably due to some medicine I'm taking. That is the main reason I haven't done a Eagle Freedom Links post or the mini version lately.  Plus, I'm on the hunt for a better job.Zilla of Zilla Of The Resistance has moved her blog to a new site so please be sure and visit her new blog soon and often. About a week or so ago we had the HHS decision mandating that all non-profit organizations provide contraception, sterilization procedures and abortion inducing pills even though that violates the conscience and religious liberty of citizens.  Another sign that Obama is an anti-constitutional tyrant who is imposing his beliefs (or lack thereof) on the American people. He is morally bankrupt IMO.  We must fight together against this unjust mandate.Some questions: Who is your choice to be the GOP nominee out of those presently running?  If you could pick who would have been your choice for GOP nominee, excluding those presently running? What are the characteristics you look for in a President?  Do you have any prayer requests? If so, please do mention and myself as well as the rest of the conservative bloggers will keep your prayer intentions in our thoughts and prayers.

Rational Nation USA - Halftime in America... Twilight Time for Rove and His Minions

NoOneOfAnyImport - A Stream of Consciousness

Atlas Shrugs - Corruption at the ACU

The Libertarian Patriot - Boehner To Cave, Holder To Skate on Fast and Furious

Adrienne's Corner - Catholics are Fed Up. Pelosi Should Be Denied Communion

Barracuda Brigade - Mark Levin To Mitt Romney: Conservatives Have Had Enough of Your Sleazy Campaign Tactics

Conservative Perspective - Do You Know What Your Children Are Learning?