Is Diet Soda Unhealthy, & Even Harmful? 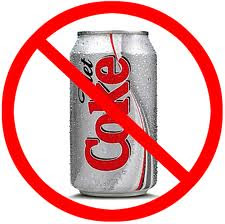 A study shows that people who drank diet sodas daily had a 61% increased risk of cardiovascular mishaps compared to those who had drank no soda.  This study shows this risk even when factoring in smoking, physical activity, and alcohol consumption, and calories consumed each day.

"This study suggests that diet soda is not an optimal substitute for sugar-sweetened beverages, and may be associated with a greater risk of stroke,"Hannah Gardener of the University of Miami and her colleagues reported at the conference.

"But the questionnaire-based study garnered criticism by experts in diet, nutrition and vascular disease."
"This study has major flaws and should not change anyone's diet soda consumption," said ABC News Chief Health and Medical Editor Dr. Richard Besser.  It has been pointed out that many people who drink  diet sodas also have poor dietary habits as well.


It looks like this study is flawed.  I think most of us already knew that it is much healthier to drink water and other juices rather than diet or regular sodas.  As for me, I still drink regular sodas but in the past 8 months I have added drinking water to my diet on a daily basis.  Its sad but I do have to say I became partial to drinking sodas (yes, maybe even slightly addicted) because in high school we had a snack break session where we could buy all sorts of candy, other goodies, and sodas to benefit the juniors in planning for prom.  I have been hooked onto sodas ever since.

"Everything in moderation" is the best advice. I take all of these reports with a grain of salt. Next week we'll hear that drinking diet soda cures cancer.

Well OK, Conservative Lady, as long as you promise to take only one! grain of salt. As for drinking diet soda, I suppose if you have a cardiovascular event of sufficient degree you probably don't have to worry about cancer.

The Food Police ... alive and well!

I drive WAY too fast to worry about diet coke.

Never much cared for coke products and diet sodas in general, although Freska's not bad.

TCL - I agree, "everything in moderation" is the best advice. This study doesn't seem to meet scientific standards (at least of a good quality).

Ken and Carol - Do you remember the whole margarine/butter fiasco? First we were told that one was really bad for our health, then the other was unhealthy, and then the scientists said one was okay for you to eat. This is why I take scientists "solutions" and "evidence" with a grain of salt.

Should everyone avoid bicycling for fear of getting into an accident? Different people have different makeups so for this study's conclusion to applied to all people is nonsensical. Fear is controlling too much of what we do today.


Way too fast? Please do watch out and be safe. I've been told I have a bit of a lead foot myself. In the snow though, I go oh so slow...

One soda I can't find easily but enjoy drinking is Mello Yellow. Freska is pretty good.

T, for adults, I have one standard. I never tell them what or how much to drink.

If they want to know what I drink, I will tell them I almost never drink diet sodas, but I am eccentric that way. I never drank them really for the past 20 years.

For my kids, I almost never buy sodas. They will have a rare soda that might be left over after a party.

Sodas themselves dissolve calcium out of bone. The phosphorus is the problem. Drop a raw egg in the shell into a glass of soda and let it sit overnight. The calcium will be gone by morning.

When my kids asked me why I only drink sugar sodas when I drink them at all, I told them that sugar had been around many years and in moderation it never caused cancer. And the newer chemicals are not in circulation long enough for us to know all the effects.

Well, shoot, I had the cardiovascular problems BEFORE I started drinking pop, so...

I wonder how much M'chel paid them to say this.

I've been telling the missus the dangers of diet soda for years but she keeps on chugging 6 cans a day.

I've read a bunch of stuff on how high fructose corn syrup and aspartame are really harmful but she loves the stuff.

Me I hardly ever drink soda.

after reading your blog, it gives me once again the hope that there are still sane peop0-les in this world besides the ignorant liberals peoples.

I have a problem. I am a caffaholic. I prefer my caffeine by syringe, but when the local free clinic is out, I smoke it. or crush up nodoze and dip it like snuff...

JUST KIDDING. My parents have drank diet soda since the 1970's when it was pure rat poison and they are both well into their '60's now. As others have said, moderation is they key.

I too drive way too fast to bother with diet soda. I go for the real thing!!!

I used to drink alot of sodas, but not diet, because I don't like the taste. I have been reading for years that the chemicals in diet sodas's are WAY worse then just having a regular sugary soda.

I hardly drink regular soda these days, for the last year or so. I simply don't buy them, too many empty calories, and too much sugar! Refined sugar is VERY bad and also makes a person gain and retain weight.

Drinking water, tea, and fruit juices are much better.
If you try and wean yourself from soda's, you won't miss them after the first week.