My Book Review of Caine's Pestilence: A Novel by John Bascom 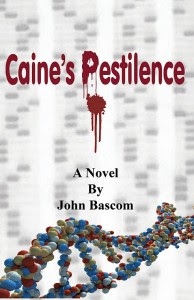 I want to thank John Bascom for asking me to write this review of his debut novel, Caine's Pestilence. I thoroughly enjoyed reading the book. This novel was a page-turner which piqued my interest to know what was coming next after each twist and turn of the plot. Caine's Pestilence is a dystopian novel set in the near future in which there is a conspiracy by the government to influence its citizens by using its power to control their lives through every means possible. It gives us an idea of how things might look in the United States if we continue to allow government intrusiveness into our lives and permit it to expand like it has been steadily expanding and growing over at least the past 50 years or so.

The protagonist of the novel is a man named John Caine. John was just an "average joe" with a family living in Detroit, working as a bank manager, living the American Dream, when out of the blue he was contacted by an individual working for the National Institutes of Health who offered him the job of a lifetime, or so it seemed at the time. Reality was far from what it seemed for John Caine, for it was at the behest of the secret cabal within the government that he was hired in the first place. What happened next John could not have imagined in his wildest dreams, how drastically his life would be altered due to plans having already been set in motion.

As John Caine became more comfortable in his new position at the NIH laboratory he began to put his personal penchant for scientific tinkering to practice. He performed various experiments under the radar (which played into the conspirators' sinister plans for him). The unexpected result, not anticipated by either John or those who were secretly setting him up, was something that might also be considered the title character of the novel. I called Caine the protagonist, and not the main character or title character, because there is another contender for those descriptives: the "pestilence" that Caine produced - a virus which functioned not so much as a new disease, but as a virally propagated cure for an already existing condition. More than that I cannot reveal without dropping a huge spoiler.

The action and suspense of the novel kicks into high gear as the government is willing to resort to anything to control the cure so that they can ensure that it stays hidden and is kept a secret from the ordinary citizenry, for they believed that the cure was worse than the disease, at least as far as it touched on their power.

I highly recommend Caine's Pestilence as a fun and thought-provoking good read. This is one of the most intriguing and best novels that I have ever read.  You can find John Bascom's site here.

I don't have my Kindle yet. But I'm making a list and have put this book on my to-buy list.

Thanks for the heads up.

Sounds like a good book, I have so many on my to-read list. Just need to find someone who can sell me some time. :)