Libya: Why Are We There?

I haven't discussed the military operation (war) in Libya up until now because I was waiting to see whether we would go into Libya or not, then we went into Libya alongside NATO and I wanted to give our President a chance to give an explanation as to why we are in Libya as well as see how the operation was being handled.

First, I don't think the situation in Libya qualifies as a legitimate humanitarian mission involving our military.  If Iraq didn't qualify according to Obama, liberals, and the UN then how the heck could Libya possibly qualify as a legitimate humanitarian mission?  To me it seems like the United States has little or no political interest in Libya.  We only get 5 percent of our oil from Libya whereas Europe is much more dependent on Libya for oil.  If France and the U.K. wanted to go into Libya to protect their oil supply and other national interests then that is their business but the U.S. should have let them go on this military operation without us.


President Obama was the absent, silent Commander-in-Chief for the first couple weeks of the uprising against Muammar Gaddafi. Then, Obama announced that he wanted regime change. Heck, I'd like another regime change LOL! In addition, President Obama and his foreign policy team were hardly ever, if ever, on the same page with regards on how they to handle Gaddafi.  And now Obama only wants to aid the rebels, even though we don't know who they are, without forcing Gaddafi to step down.  There is information to suggest that there are pockets of Al-Qaeda amongst the rebels.  Why the heck are we aiding terrorists who want to kill us?  So now the U.S. is a part of a no-fly zone, just like Iraq was under a no-fly zone for 12 years.  Does NATO and the U.S. plan to have Gaddafi under a no-fly zone for anywhere near the length of time that Iraq was under a no-fly zone?  I hope not.

Obama said our interests and values are at stake. How? American values are at stake because Libyans are engaging in a civil war?  That is nonsensical. He says we have a responsibility to act. If we didn't have a responsibility to act in Iraq then surely we don't don't have even 1/10th the responsibility to act in Libya.  Saddam Hussein came into power in 1979.  Under Saddam Hussein there was government-approved mass murder, torture, forced disappearances, and rapes being committed.  There were also chemical weapons. In 1988 Saddam led a brutal campaign which ended up slaughtering 50,000 to 100,000 Shiite Kurds. In 1991 Saddam committed widespread massacres which is estimated to have killed between 80,000 and 230,000 Iraqis.  Those are only a few of the horrors committed by Saddam Hussein.  Plus, Saddam violated 18 UN sanctions.  The UN had found that he had blocked the arms inspectors from being able to do their jobs but he denied it.  Saddam claimed that Iraq didn't have any banned chemical, biological and nuclear weapons programmes. You can view a list of human rights violations here.  It was already known at the time that Saddam had previously used a wide array of chemical weapons against the Kurds including Sarin, mustard gas, and nerve agents that killed thousands but yet he denied possessing chemical weapons.  Since he had already used chemical weapons on his own people, had obstructed the weapons inspectors from being able to find out whether he did in fact have chemical, biological, and nuclear weapons or not there was no way we could trust a dictator's word.   Since Saddam's denials of possessing weapons had been proven to be false many times before his denials of having WMD's in his possession lacked plausibility.  If you look at all the brutality that Saddam ordered and did how the heck could liberals with a straight face possibly claim that the military action in Iraq was not justifiable, especially when most liberals voted to authorize the use of force?

And, what did Obama say about removing dictators in 2005?  Shall we say hypocrisy? 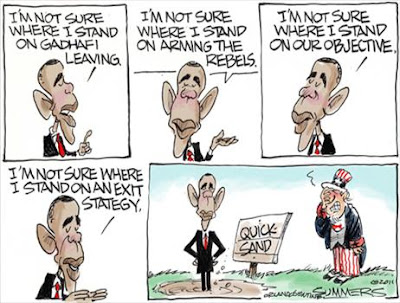 Many liberals believe this military action in Libya to be the right thing to do because we went into Libya with the United Nations.  For anyone to give credence to the U.N. is absurd, especially after the oil for food scandal.  Obama said "Then we took a series of swift steps in a matter of days to answer Gadhafi's aggression."  For about three weeks Obama was dilly-dallying as the rebels were winning and kicking butt against Gaddafi, taking control of cities but there was nothing but was inaction and mixed messages on the part of this administration.  Now, I am not for this military action but I am just pointing out that I would hardly call this swift action.

In 1977 Gaddafi tried to buy a bomb, then a nuclear weapon, and weapons of mass destruction.  In 2005 weapons inspectors found chemical weapons in Libya. Several people were indicted for assisting Gaddafi but why wasn't Gaddafi indicted also? He is suspected of being behind the Lockerbie bombing but was never brought up on charges.  Why is that? Gaddafi had numerous clashes with other countries and there may have been a time when he killed some of his military when he first began his rule, and now he has killed some civilians but why are we using military force in Libya?  I have no doubt that he's a bad, bad dude but I don't see how it is in the United States' best interest to be in Libya.  So I ask why are we in Libya?
Posted by Teresa at 3/31/2011 03:21:00 PM

Once again, Obama goofs up. We do not belong in Libya, we have no business interfering with their civil uprising and most certainly we don't need anything from them.

Obama supports the wrong people (Muslims) and totally disses our allies, such as Israel.

We see where his loyalties lie and it is NOT for the United states or its people.

OK ... The stupid people of Libya started this thing. Kadaffy decided he had enough and protected himself. The morons that we're protecting could have walked away any time. I don't care what happens there as long as we get the F out!

Teresa, I know that a lot of people think that Glenn Beck is a joke and a moron, but what that man says is 100% spot on. If you want to know what is really going on in the middle east, Beck is laying it all out there. Obama is an evil s.o.b who is being controlled by another evil s.o.b.

Did you know that the so-called spontaneous uprising in Egypt and else where, was not spontaneous at all, Obama sent his people to the middle east back in 2009 at the urging of Soros and his group to get the whole thing started, and right from the get-go, Obama started selling out Israel and his own country. I will posting more on this on my blog in a day or two.

I posted on this too hun..what a wrecking ball hussein is!

Good set of questions, Teresa. I agree with you that Obama has seemed irresolute before and he is irresolute still.
I think I answer some of your questions in my Post of a few minutes ago, "Libya Can and Should Be Won With Mercenaries", which proposes the thesis that we can advance the security of the region - plus getting rid of an enemy - without having to put troops on the ground.

The Libyan rebels were dumb to start a fight they can't win. Obama and crew were dumb to get involved in a lose/lose scenario.

In my view, we have no business in Libya.

Oh, sure, Gaddafi is despicable. But so are any number of other regimes: North Korea, Cuba, Venezuela. I could go on and on. Are we going to go into those countries and depose their rulers too? I don't think so.

Ultimately, I'm all for letting Moslems fight other Moslems and thereby settle their own tribal wars.

Nazis in flying saucers? That could be the reason.