Obamacare: A Change For the Worse 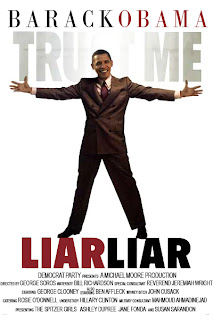 During the presidential campaign Obama promised that there would be transparency unlike the previous administrations. President BO promised to have the health care debate aired on C-Span.  Well, that never happened. Obama LIED!!!  This administration has been about as transparent as a 40 foot high brick wall charged to keep the enemy out.  What the Democrats are masquerading as "reform" is the biggest piece of garbage in history. Obamacare will do great harm to our citizens and our country.  The truth is that health care costs will skyrocket under Obamacare instead of the Democrats claims that it lowers health care costs. Obamacare will change the status quo and for the worse.

Here is an article called, Change Nobody Believes In:

And tidings of comfort and joy from Harry Reid too. The Senate Majority Leader has decided that the last few days before Christmas are the opportune moment for a narrow majority of Democrats to stuff ObamaCare through the Senate to meet an arbitrary White House deadline. Barring some extraordinary reversal, it now seems as if they have the 60 votes they need to jump off this cliff, with one-seventh of the economy in tow.

Mr. Obama promised a new era of transparent good government, yet on Saturday morning Mr. Reid threw out the 2,100-page bill that the world's greatest deliberative body spent just 17 days debating and replaced it with a new "manager's amendment" that was stapled together in covert partisan negotiations. Democrats are barely even bothering to pretend to care what's in it, not that any Senator had the chance to digest it in the 38 hours before the first cloture vote at 1 a.m. this morning. After procedural motions that allow for no amendments, the final vote could come at 9 p.m. on December 24.

Even in World War I there was a Christmas truce.

The rushed, secretive way that a bill this destructive and unpopular is being forced on the country shows that "reform" has devolved into the raw exercise of political power for the single purpose of permanently expanding the American entitlement state. An increasing roll of leaders in health care and business are looking on aghast at a bill that is so large and convoluted that no one can truly understand it, as Finance Chairman Max Baucus admitted on the floor last week. The only goal is to ram it into law while the political window is still open, and clean up the mess later.

• Health costs. From the outset, the White House's core claim was that reform would reduce health costs for individuals and businesses, and they're sticking to that story. "Anyone who says otherwise simply hasn't read the bills," Mr. Obama said over the weekend. This is so utterly disingenuous that we doubt the President really believes it.

The best and most rigorous cost analysis was recently released by the insurer WellPoint, which mined its actuarial data in various regional markets to model the Senate bill. WellPoint found that a healthy 25-year-old in Milwaukee buying coverage on the individual market will see his costs rise by 178%. A small business based in Richmond with eight employees in average health will see a 23% increase. Insurance costs for a 40-year-old family with two kids living in Indianapolis will pay 106% more. And on and on.

Thanks for that - the WSJ is right on the money.

Teresa, this is just a lost battle and bastard cannot and will not change this great nation. So have tried before and they have always failed and Barack Himself Obama will soon realize that his dream for America is just that, a dream that will never become reality. Many people in this country are stupid, but many more see the truth.

Great article. I agree with Ron. Even this can be undone. We do need to win before all of it takes effect, however. The taxes and other regs that will increase costs will begin immediately. That will cause all the pain needed to win in 2010, and 2012.

I hate to say that I must disagree with Ron Russell. I believe that this health care will get passed along with all of Obama's other socialist garbage. Americans will lose all of their rights and freedoms. Why? Because even though not all Americans are stupid and can see the truth, they lack all moral courage to take the steps needed to get this son of a commie b_ _ch and his evil minions out of office.

I hope and pray that I am wrong, but somehow I don't think so.

The Democrats will pass the legislation, Obama will sign it but there will be an avalanche of lawsuits.

ObamaCare is unconstitutional and Americans don't want it.