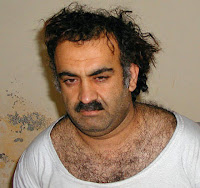 The KSM civilian trial is going to be a "show trial" that enables KSM, the mastermind of 9/11 and the four other terrorists responsible for planning 9/11 to rile up and encourage and round up the other terrorists all over the globe. This will also give them a platform to spew their hatred for America, The Bush administration, and our brave men and women in the military. This will make America and especially New York City a huge target for another terrorist attack. Eric Holder and his comrades are giving KSM his wish to be tried in NYC and to be given a lawyer. So, for some reason our Attorney General is accommodating a terrorist and appeasing him by granting his very wishes. Some people think that us doing nothing to stop terrorism will bring peace. These people are very misguided because terrorists do not stop their actions just because we are lax in our security and stop fighting terrorism across the globe. Terrorists look for our weaknesses so that they can attack the West at every chance they can get. Terrorists want to destroy the West and not live peacefully with us. These terrorists do not want to coexist with us, they want to conquer the whole world in honor of Allah and kill us. The attack on 9/11 was an Act of War and nothing less. KSM and the other terrorists must be treated as our enemy, and not as mere civilians who just committed a crime. Eric Holder and Obama's decision to try our enemy in a civilian court room is unconscionable. Obama and Holder are giving the terrorists more rights than are required by International Law. Why in the heck would our government give more rights to terrorists during wartime? It just doesn't make sense.

Since hearing the news from Eric Holder God has inspired me and I have felt called to do something in response to this agriegous act being perpetraited by our own government. I came up with the idea to have a day of protests in both New York City and in the Pittsburgh/Shanksville area. The protests will take place on February 6, 2010. Michael Johns, the National Tea Party Leader and a friend from twitter, and Greg a friend from the group PCRG which I joined earlier this year is helping out with the planning this event. I would love it if you would attend one of the protests. The plan is for the protest in New York City to start at 11:00am and the one in Pittsburgh will start at 3:00pm. Michael Johns has most generously agreed to speak at both protests. Pamela Geller from Atlas Shrugs has been most gracious and agreed to be a speaker in NYC. I have emailed Glenn Beck and will email Sean Hannity today. I have started a facebook group also. I hate asking for donations but being a college student of financially limited means, we are looking for donations in order to pay for the protest fees and sound systems. Any amount would be greatly appreciated. And, if you have any ideas on how to promote this great cause I appreciate any and all ideas.

There is no good reason for the decision to try Khalid Sheikh Mohammed in a New York City civil court room. Everything was in place to have these terrorists tried in front of a military commission. At no time in history have our military been required to give our enemy miranda rights which are required for a defendent who has a civilian trial in America. So, are all their admissions of guilt going to be thrown our because of not being mirandized? Is this what Eric Holder and Obama want? I don't know. If they truly loved this country and cared about the American people's safety Holder and Obama would have let the military commission proceed with their trials against these terrorists- our ENEMY. Eric Holder and President Obama are extending rights to KSM and the other terrorists as if they were civilians living in the U.S., or U.S. citizens, when they were actually captured on a foreign battlefield. I will say this again: This is unconscionable!!

Here is both the definition of an unlawful enemy combatant and the explanation of the jurisdiction of military commission as outlined by the Military Commissions Act of 2006. With these provisions in place to try terrorists in front of military commissions there is absolutely no good reason why KSM and the four other terrorists are being tried in a New York City civilan court room.

‘‘(i) a person who has engaged in hostilities or who

has purposefully and materially supported hostilities

against the United States or its co-belligerents who is

not a lawful enemy combatant (including a person who

is part of the Taliban, al Qaeda, or associated forces);

the enactment of the Military Commissions Act of 2006,

has been determined to be an unlawful enemy combatant

by a Combatant Status Review Tribunal or another competent

tribunal established under the authority of the

President or the Secretary of Defense.

with respect to the United States, means any State

or armed force joining and directly engaged with the United

‘‘(a) JURISDICTION.—A military commission under this chapter

shall have jurisdiction to try any offense made punishable by this


‘‘(b) LAWFUL ENEMY COMBATANTS.—Military commissions under

this chapter shall not have jurisdiction over lawful enemy combatants.

Lawful enemy combatants who violate the law of war are

subject to chapter 47 of this title. Courts-martial established under

that chapter shall have jurisdiction to try a lawful enemy combatant

for any offense made punishable under this chapter.


DISPOSITIVE.—A finding, whether before, on, or after the date of

the enactment of the Military Commissions Act of 2006, by a

established under the authority of the President or the Secretary

for purposes of jurisdiction for trial by military commission

may, under such limitations as the Secretary of Defense may prescribe,

adjudge any punishment not forbidden by this chapter,

including the penalty of death when authorized under this chapter

or the law of war.

I will post the other parts of the episode soon.

New York is a huge target during these trials. I am not sure I would want to be there protesting, especially with the lackadaisical attitude towards terrorism of the Obama administration.

BB,
I don't think that KSM is going to be moved to NYC by Feb.6. But I definitely understand what your saying about safety, or lack thereof under Obama.

I suspect that Radical Islam will also provide NYC with a loud protest during the trial.

This government is doing exactly what the enemy wants us to do.

Nickie has it right, impeach that imposter in the White House. The problem is not Eric Holder, if he were gone tomorrow, that creep Obama would appoint another just like him to the AG position. KSM should have been shot, the recent airplane bomber should have been grilled then shot. No more civilian trials for these guys in America. Only a swift military trial and a short rope for these bastards.

Teresa, it will be physically impossible for me to be with you in person, (because if you follow my blog you'll know, I don't own any long pants, let alone a winter jacket) but you can bet your last dollar that I'll do everything in my power to promote your noble cause... I'll post anything and everything I can to help... I'm with Ron on this, the only good terroist is a dead terrorist... The sooner these panty wastes stop worrying about giving these animals civilian trials and start putting bullets through their pea brains, the sooner we can start to live as free Americans... My only prayer is that some a**hole liberal reads my previous sentence and pisses themselves... Before I'm through "Depends" will be standard issue for those liberal bastards...

This trial sets precedent. In and of itself, it is grounds for impeachment in that he is aiding the enemy in a time of war.

There is simply no valid reason to do this in NYC. NONE. This is all about putting Bush on trial. It's a great distraction from all Obama's failings.

Nickie,
Yes, we need to impeach the traitor.

The Born Again American,
Thank You very much. I appreciate any way that you can help out. The terrorists must be eliminated permanenetly. None of this treating them with kid gloves crap as this administration is doing. Blast them to smithereens.

Eman,
Your right, Obama is aiding our enemy in a time of war. Impeach Obama, fire Holder and throw them in jail and throw away the key.

Matt,
Your right. There is NO VALID reason to have this trial in NYC.

Great post! This administration is either incredibly inept or trying to help out al Queda any way they can. I'm ashamed that BO is the president of my country. He's a joke, a poser, a fake, a loser. And yes, a traitor.

what will it take for our country to wake up Teresa! HAPPY NEW YEAR MY FRIEND!!!

As if there isn't already a target on America ... this will definitely high light it.

I couldn't agree more. If someone wanted to know how I felt on KSM, I would direct them here.

Ramblings Of a Young American,
Thank You. I really appreciate the compliment.

Thanks for stopping by and commenting.

ACTIVIST BRIAN STEN I WILL PROTESTS NEW YORK CITY IS A HUGE TARGET .THESE PEOPLE CAN GET A FAIR TRIAL IN THERE OWN COUNTRY

Anon,
The protest has been postponed until around the end of March due to my health issues etc. I just tweeted this but if everyone could pass along the word that would be great.

Plus, if anyone has experience in planning or would love to join in planning this event I would be forever grateful to whomever does help.