Over the years, I have noticed just how insensitive liberals can be toward conservatives when a liberal violates a conservative person's space or privacy rights, crosses the line in a "joke" (David Letterman),  targets the person's family, stalks the person and their family, and the lame stream media has even resorted to being hypercritical of Sarah Palin.  On the other hand, when something miniscule happens to a liberal the lame stream media and liberals become overly sensitive and act like a bunch of Sarah Bernhardts.  Over at The Daily Caller, Jim explains why a professional writer took "Sarah Palin is the girl next door" a little bit too literally.  He also fends off the liberal sharks' claims that she is overreacting.  She is not overreacting.  This is a most serious matter that is not to be taken lightly.  Mark Levin took a stand and decided that he wasn't going to put up with Palin's stalker, Joe McGinniss, flinging his crap at Palin anymore, he decided two can play that game, and he announced Joe McGinniss' email address live on air.  The transcript of Mark Levin is here.  If anyone wants to send her stalker a message, here is Sarah Palin's stalker's email --  JoeMcGinniss@gmail.com.  I decided to take the liberty to defend Sarah Palin and let this sicko know exactly what I think of him and his actions. 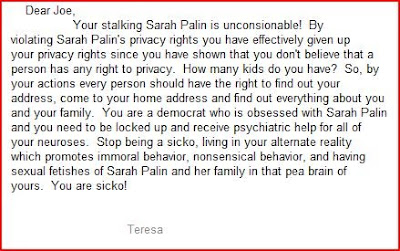 And absolutely a restraining order should be exercised immediately.

I agree! A Restraining Order is needed. Unfortunately, sometimes the police require too much verification as proof of being stalked even though the proof is present or right there in front of their faces. That's bureacracy (not working) for us folks.

Excellent, i always love to hear when liberals have to choke down their own medicine.

Bravo. Well written and I'm sure you're not the only one to send the twit a message.

Five gets you ten, McGinnis' server has crashed by now from
all the email activity.

I heard Todd was building a high fence between the houses.
I think Todd should be a candidate for the new medal being proposed for "courageous restraint".

I think someone ought to install a webcam or two on the edge of Joe's rental property and broadcast it online 24/7. Unless that's the kind of attention Joe's really wanting. In which case he should be hired as the only mole in a 1-mole "Whack-a-Mole" game...

Oh, this could be fun.

Hi Teresa, I LOVE your note.
Not that the mental case will read or comprehend it.
"Stop being a sicko"
I luv it, I wish it was that easy. You tell sicko's that,
they just get worse.