GLAAD's Tolerance: Agree Or You Are Anti-Gay

GLAAD is a militant intolerant tyrannical homosexual group which by its words and actions espouses a philosophy where persons absolutely must believe their way about homosexuals to be considered tolerant. If you are a public figure and believe differently than GLAAD they will cause a ruckus at your place of employment, try to get you fired, and put you on their blacklist. GLAAD has no concept of disagreeing while being civil. Most everyone, if not all, in conservative punditry espouse their own views but don't go after particular public figures trying to get them fired for them believing differently.  Liberty loving conservatives/libertarians try to persuade others to change their views with words, not with threats, coercion, intimidation or force.

Then there are some spineless Republicans, journalists, and others in conservative circles who have either fallen for GLAAD's perverted interpretation of what constitutes tolerance or are scared sh*tless so they believe its defamation to speak negatively about homosexuality. Courage is required to stand up to these fascists. The timid either need to shut the hell up if there not going to stand up for liberty or reach down deep inside themselves and gain some courage and stand up for freedom of speech and freedom of religion.

Robert Oscar Lopez of American Thinker explains what happened to him when he was blacklisted by GLAAD:

I won't hyperlink this, but if you go to GLAAD's website and seek out their "commentator accountability project," you will find my name.  This is GLAAD's blacklist.  Within hours of GLAAD's publication of my addition to the list, which amounts to an excommunication from polite society, an e-mail was sent to the president of my university, along with dozens of other high officials in California, with the announcement: ROBERT OSCAR LOPEZ PLACED ON GLAAD WATCH LIST.The e-mail stated clearly that as a result of my being placed on this list, I would never get a direct interview in the United States.  (Whoever "they" are, they made good on the threat, because when I was brought onto Al Jazeera, they made sure that I was the only one critical of gay adoption, versus two hosts and two other panelists who were for it, and the host cut my microphone.)According to the press release sent to my university, any media outlet introducing me would be bound to introduce me as an "anti-gay activist" certified by GLAAD as a bigot.  When I read the claims of this e-mail, I wondered if this would be true -- would media in the United States really introduce me by saying I was certified as "anti-gay" by GLAAD?

Well, the answer to that question remains mostly unanswered.  Aside from that one fling on Al Jazeera, since GLAAD placed me on their blacklist, no secular media outlet has invited me on its show in the United States.  In-depth interviews with me have been broadcast in Chile, Russia, France, Ireland, and a number of other nations.  In the United States, Christian broadcasters like the American Family Association and Frank Sontag's "Faith and Reason" show in Los Angeles have interviewed me.  And I'd been interviewed, prior to the GLAAD blacklisting, by Minnesota affiliates of NBC, CBS, Fox, and NPR, as well as a number of newspapers.  Since GLAAD's blacklisting, none.

Prior to GLAAD's blacklisting, I had received calls from people at universities discussing their interest in having me come to campus and give speeches.  Three were working with me to set up dates.  Since GLAAD's blacklisting, none.  Those who had discussed this with me said point-blank that their superiors did not want to create controversy.

That is the power of GLAAD.

Pope at Christmas Eve Mass: 'Do Not Be Afraid'


"On this night, let us share the joy of the Gospel. God loves us. He so loves us that he gave us his son to be our brother, to be light in our darkness. To us the Lord repeats, 'Do not be afraid,' ... And I, too, repeat, do not be afraid,'" the Pope said.

"Our Father is patient. He loves us, he gives us Jesus to guide us on the way which leads to the promised land. Jesus is the light who brightened the darkness. Our Father forgives always. He is our peace and light."

He called on the throngs gathered at St. Peter's Basilica to cast aside hatred. "God is light and in him there is no darkness at all. Yet on the part of the people, there are times of both light and darkness, fidelity and infidelity, obedience and rebellion, times of being a pilgrim people, and times of being a people adrift," the Pope said. "In our personal history, too, there are both bright and dark moments, lights and shadows. If we love God and our brothers and sisters, we walk in the light. But if our heart is closed, if we are dominated by pride, deceit, self-seeking, then darkness falls within us, and around us. Whoever hates his brother -- writes the Apostle John -- is in the darkness; he walks in the darkness, and does not know the way to go, because the darkness has blinded his eyes." 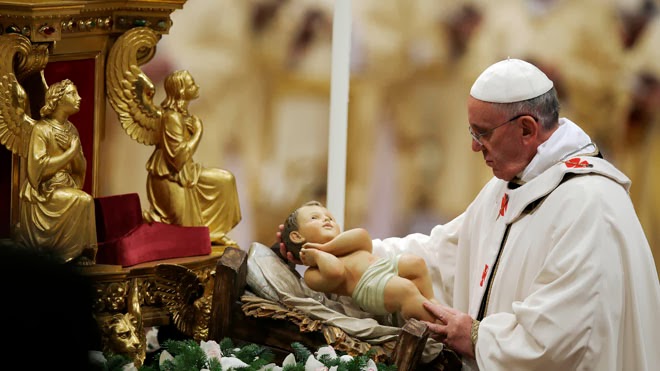 Do government health regulations cause hunger?

On December 5th Pope Francis had a private audience with leaders of  “Movimiento de Trabajadores Excluidos” (Excluded Workers Movement) of Argentina where he said:

“We are living in a throwaway culture where we easily leave over things, but people as well,” the Pope said.
“You recycle and with this, two things are produced: an ecological work, which is necessary, and on the other hand, a production that promotes brotherhood and gives dignity to one’s work, you are creative in your production, but also creative in caring for the earth, of the world in this ecological dimension.”
Wasted food, he continued, “can feed all the hungry people in the world.”
“Be conscious that food should not be wasted, because there are children who are hungry. Thank you for what you do,” he said.


After thinking a bit I came up with this question -- Do government health regulations cause hunger, leave the poor hungry?

I don't know how it is elsewhere, but in the United States restaurants are required to throw away all their food at the end of the night. The health departments regulations forbid restaurants from donating this food. If it wasn't for government regulations we could have solved the problem of feeding the hungry at least in the U.S.

A teacher in New Mexico told his students that they could dress up as Santa, elves, or reindeer. A black student came to class dressed as Santa and the teacher said, "What are you doing wearing a Santa Clause outfit? Don't you know that Santa Claus is white?"

Is this teacher stupid? Does he have no common sense? Is he a rude humbug Scrooge? Racist? An ignorant insensitive, hurtful moron?

The teacher shouldn't have said a damn word criticizing the student. The students were asked to dress up as one of three Christmas characters and the black student dressed up as Santa. So what if Santa is portrayed as white. The activity sounds like it encouraged creativity, imagination, and fun.  The teacher ruined the spirit of the project. Bah humbug!

I think this teacher is ALL of the above.  To me, what he said to the student sounds racist. I'm not sure there is any other way to take what he stated.

The teacher did apologize and was put on paid administrative leave. Here is a statement from the director of Rio Rancho Public Schools:


"This situation involves a teacher recently hired by Cleveland High who made -- and admits he made -- a stupid mistake," the director said. "The remark was inappropriate and should not have been made. The teacher feels very badly about what occurred. He self-reported the incident to the principal and has apologized to the student and to the student's parent. Appropriate disciplinary action has been taken."


Michael Rougier, the student's dad, believes the teacher should be fired.  The teacher has apologized to both the student and his father, and has been put on leave so anything more would be taking this incident out of proportion IMO.


One more thought: Maybe the teacher misspoke stupidly and really isn't racist. But his statement certainly shows a racist tendency.

Animals in the Christmas Spirit

Jon Stewart is spot on!! The Obama administration said that the NSA wasn't spying on U.S. citizens and it is. So that would be considered a lie. Not surprised.

Topless pro-abortion feminuts attacked a group of people who prayed while they stood in front of the Catholic cathedral in San Juan, Argentina in order to protect the cathedral. The radical feminists sexually harassed the men, drew Hitler mustaches on their faces, and spray painted their clothes, faces, and crotch areas. The men did not budge. They stood bravely defending the Faith. God Bless them.

Why do Left-Wing loons feel the need to attack others in public?  Why do radical feminuts feel they must act out writing perverted crap on people who were simply praying and protecting a Cathedral?  What is so hard about acting responsibly, being respectful of others, and discussing their position peacefully?  The fact that these pro-abortion feminists wanted to vandalize and desecrate Catholic churches and they burned an effigy of Pope Francis is abominable, Christianophobia, and intolerant. It would be good if people would be civilized human beings instead of acting like cavewomen.