John Quincy Adams - Nip the shoots of arbitrary power in the bud, is the only maxim which can ever preserve the liberties of any people.

John Quincy Adams - America does not go abroad in search of monsters to destroy.

James Buchanan - The test of leadership is not to put greatness into humanity, but to elicit it, for the greatness is already there.

James Buchanan - The ballot box is the surest arbiter of disputes among free men.

Martin Van Buren - No evil can result from its inhibition more pernicious than its toleration.

Martin Van Buren - There is a power in public opinion in this country - and I thank God for it: for it is the most honest and best of all powers - which will not tolerate an incompetent or unworthy man to hold in his weak or wicked hands the lives and fortunes of his fellow-citizens.

Martin Van Buren - For myself, therefore, I desire to declare that the principle that will govern me in the high duty to which my country calls me is a strict adherence to the letter and spirit of the Constitution as it was designed by those who framed it.

Intolerance by the Tolerant

Lawrence Torcello, a professor of philosophy from Rochester Institute of Technology, has called for 'deniers' of anthropomorphic climate change to be imprisoned.  He said 'science misinformation' should be considered a crime.  Professor Torcello is spouting intolerant, opinionated declarations as if man-made climate change has been proven scientifically.  It hasn't.  Man-made climate change (global warming) is a theory which has been politically propagandized to the point of putting undue pressure on the scientific community.  Torcello admits that his proposal would violate the first amendment. Well what a reasonable guy he is. Wait!! Wait!! Just when I thought there was a glimmer of sensibility the professor said “We must make the critical distinction between the protected voicing of one’s unpopular beliefs, and the funding of a strategically organised campaign to undermine the public’s ability to develop and voice informed opinions.”  He believes governments need to update their free speech laws.  No man has the authority to take away free speech!

It looks like a good many Americans disagree with the professor.

The atheist group Freedom From Religion Foundation is demanding that Gov. Scott Walker delete a tweet.  On Sunday Scott Walker tweeted "Philippians 4:13."  In a letter the co-presidents wrote: "This braggadocio verse coming from a public official is rather disturbing,"wrote Gaylor and Barker to Walker.  You know what is disturbing?  Atheists with hutzpah who are clueless about free speech. Atheists who try to stifle free speech. These intolerant atheists need to take a course on the first amendment.


The Freedom From Religion Foundation strikes again.  The radical atheist Gestapo-like organization sent a letter demanding the removal of The Ten Commandments monument on public property in Idaho.  Around 500 people gathered in Sandpoint, Idaho to protest the monument's pending removal, to support the Ten Commandments display staying right where it is.

"I don't like this at all," said Gladys Larson to the Bonner County Daily Bee, "There's no way someone can come into our town and dictate what goes on here."

"The Ten Commandments monument was donated to Sandpoint in 1972 by a local chapter of the Fraternal Order of Eagles, and was placed in Farmin Park."

I am sick of spineless city officials giving into the offended while not giving a damn about local citizens constitutional rights. I am highly offended by this atheist supremacy that is happening all across our country.
Posted by Teresa at 3/19/2014 06:34:00 PM 13 comments:

Rick Santorum: Republicans Should Take a Lesson from Pope Francis


"I think we need to take a lesson from someone who is maybe the most popular person in the world right now — Pope Francis," he said.

"Well, we're not a religion," he continued, "and we're not going to go out there and talk about the good news. But what we need to do is go out and talk about the news of a good America and what that good America can be. We need to paint a picture for people. We need to use a brush where they see themselves in the painting. They see a part of their life, where they hear someone or see a policy and say, 'that's me.' We need to be the 'that's me' party.

Wayne LaPierre at CPAC: "We Don't Trust Government! Because Government Has Proven Itself Untrustworthy!"

The IRS is a prime example of leviathan run amok. IRS employees abused their power when they targeted conservative groups. The IRS is a gigantic government agency with way too much power which enables and covers up criminal behavior. There needs to be substantial change and a reduction of power in the IRS. Rep. Dave Camp's legislation is a start. One of the proposed reforms in Camp's bill is a change to Internal Revenue Code 6103 which "would require the government to disclose to victims both the status of an investigation as well as its result, including the identity of the perpetrator." Currently, the same law that makes it illegal to leak confidential tax records also covers the butts of offenders who violate that same law.  That is friggin nonsensical. Corrupt to the core. And we're supposed to trust the IRS with the fair collection of Obamacare taxes? 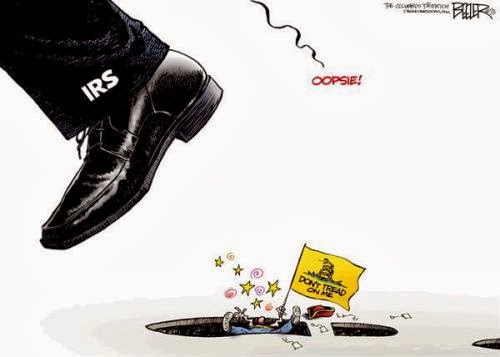