Sacrilege at Ground Zero; Does One Really Have the Right to Build Anywhere? 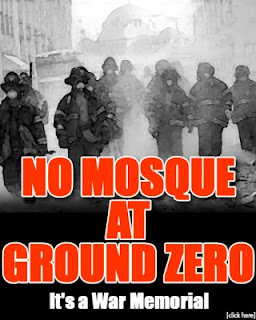 I am in total agreement with Charles Krauthemmer. He is spot on! And, since Krauthammer is so eloquent and nails it, IMO, I am posting his wise words on the Ground Zero Mosque below:

By Charles Krauthamer:
A place is made sacred by a widespread belief that it was visited by the miraculous or the transcendent (Lourdes, the Temple Mount), by the presence there once of great nobility and sacrifice (Gettysburg), or by the blood of martyrs and the indescribable suffering of the innocent (Auschwitz).


When we speak of Ground Zero as hallowed ground, what we mean is that it belongs to those who suffered and died there -- and that such ownership obliges us, the living, to preserve the dignity and memory of the place, never allowing it to be forgotten, trivialized or misappropriated.

That's why Disney's 1993 proposal to build an American history theme park near Manassas Battlefield was defeated by a broad coalition that feared vulgarization of the Civil War (and that was wiser than me; at the time I obtusely saw little harm in the venture). It's why the commercial viewing tower built right on the border of Gettysburg was taken down by the Park Service. It's why, while no one objects to Japanese cultural centers, the idea of putting one up at Pearl Harbor would be offensive.

And why Pope John Paul II ordered the Carmelite nuns to leave the convent they had established at Auschwitz. He was in no way devaluing their heartfelt mission to pray for the souls of the dead. He was teaching them a lesson in respect: This is not your place; it belongs to others. However pure your voice, better to let silence reign.

Even New York Mayor Michael Bloomberg, who denounced opponents of the proposed 15-story mosque and Islamic center near Ground Zero as tramplers on religious freedom, asked the mosque organizers "to show some special sensitivity to the situation." Yet, as columnist Rich Lowry pointedly noted, the government has no business telling churches how to conduct their business, shape their message or show "special sensitivity" to anyone about anything. Bloomberg was thereby inadvertently conceding the claim of those he excoriates for opposing the mosque, namely that Ground Zero is indeed unlike any other place and therefore unique criteria govern what can be done there.

Bloomberg's implication is clear: If the proposed mosque were controlled by "insensitive" Islamist radicals either excusing or celebrating 9/11, he would not support its construction.


But then, why not? By the mayor's own expansive view of religious freedom, by what right do we dictate the message of any mosque? Moreover, as a practical matter, there's no guarantee that this couldn't happen in the future. Religious institutions in this country are autonomous. Who is to say that the mosque won't one day hire an Anwar al-Aulaqi -- spiritual mentor to the Fort Hood shooter and the Christmas Day bomber, and onetime imam at the Virginia mosque attended by two of the 9/11 terrorists?
An Aulaqi preaching in Virginia is a security problem. An Aulaqi preaching at Ground Zero is a sacrilege. Or would the mayor then step in -- violating the same First Amendment he grandiosely pretends to protect from mosque opponents -- and exercise a veto over the mosque's clergy? CONTINUED 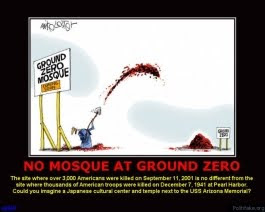 Do the people who want to have a mosque built just a stone's throw away from hallowed ground really have a "right" to build this mosque?  If the proposed building of a particular building on a site can be refused due to zoning laws and aesthetics why couldn't the sensitivity of  the victims families of those murdered on 9/11 hold more clout and overrule the "right" for this mosque to be built? Wouldn't you think that the sensitivity of the 9/11 victims families would be considered far more important to take into account than zoning laws or aesthetics when approving the building of a particular building? I would think so, and in spades. 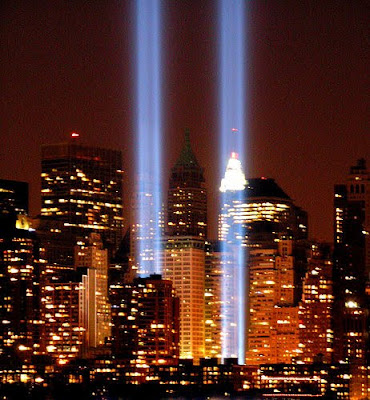 Krauthammer says, "By the mayor's own expansive view of religious freedom, by what right do we dictate the message of any mosque?"

He's nailed it there. Obviously Obama and El-Bloomberg have no intention to interfere with the message of this--or any other--mosque.

I wrote something about this as well. This victory for Muslims has deep-rooted history behind it.

One modern day philosopher said (para), "The terrorists advocate the destruction of our freedoms, but are the first to hide behind them when they are captured." I'm not trying to say that these are terrorists, but rather a new branch of the soft tyranny that is slowly gripping the country.

I love the Hammer, he speaks for me with his eloquent post. Of course, now that obummer has sided with his fellow muslims, the mosque is probably a done deal.
How horrible for all those who died, and their families.

Outside of the insult that it makes to all Americans it would be hypocritical and unconstitutional for us to say no to a religious institution... I think we could use the fact that it is there to remind ourselves and our politicians that the world is a savage place and to not ever let our guard down....ever.

Don’t you just love it when these libs tell you that “Muslims also were among the 3000 people who died that day while at work in the towers. Are they also to blame for it?”

Iv’e been hearing that crap for an argument for weeks now. I wasn’t buying it then and I ain’t buying it now…… Let us be clear: al-Qaeda killed nearly 3000 people on that day. Muslim or not! I am not against the mosque per se, but I am concerned with the unmistakable message of Muslim triumphalism accompanying it. It has been said the mosque will be a place for peace and reconciliation. If so, then why the name “Cordoba”? The Cordoba name is reference is an obvious declaration of Muslim triumphing over the West. It would be like proposing to build a Christian church directly in the heart of Hiroshima and calling it the Enola Gay initiative. Where does the spirit of Freedom of religion end, and rubbing salt into the wound, and slapping us in our faces by insisting. Where the hell were these gentle folks all these years, why weren’t they condemning the “Extremists” Muslims ?
If you really think about it, the Muslims that were killed on that day should feel the same way! We hear all day long about the Muslims who preach how it was extremists that bombed the twin towers. Well yes it was the Muslims , and who knows who these Muslims that are so hot on this project are! Maybe they are “Extremists” Muslims and maybe not. I personally don’t care. I don’t want it there

This is another example of "creeping sharia." They just take tiny steps, but when you add them all together, the message is clear.

He's nailed it there. Obviously Obama and El-Bloomberg have no intention to interfere with the message of this--or any other--mosque. ..exactly right..great work Teres!

Not just creeping sharia. We've got creeping communism/socialism as well. The wolves are all around us.