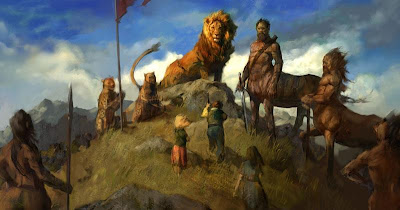 Liam Neeson, who stars as the voice of Aslan in the Narnia movie series, has caused quite astir on the internet with his interpretation of Aslan:

“Aslan symbolises a Christ-like figure but he also symbolises for me Mohammed, Buddha and all the great spiritual leaders and prophets over the centuries.

That’s who Aslan stands for as well as a mentor figure for kids – that’s what he means for me.”

Okay.  Did Buddha, Mohammed or any other spiritual fugure besides Christ die and then rise from the dead?  No, of course not.  This is nothing but more multicultural liberal spin on the real interpretation of Aslan in Narnia - pandering to other religions by trying to distort the Christian message in the Narnia series. 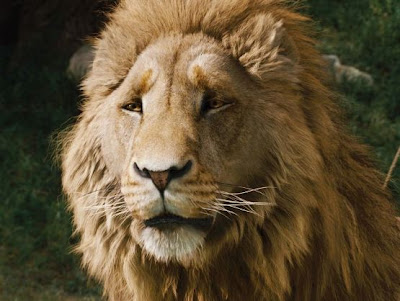 The Blaze points out that Neeson's comments are not sitting well with Narnia fans and those who revere Lewis:

Walter Hooper, Lewis’s former secretary and a trustee of his estate, said that the author would have been angered by Neeson’s comments.

He said: “It is nothing whatever to do with Islam. Lewis would have simply denied that. He wrote that ‘the whole Narnian story is about Christ’. Lewis could not have been clearer.”

Mr Hooper attributed Neeson’s remarks to political correctness and a wish to be “very multi-cultural”.

Others are blunt in their criticism of Neeson's remarks.

William Oddie, a fomer editor of The Catholic Herald and a lifelong fan of the Chronicles of Narnia, accused Neeson of ‘a betrayal of Lewis’s intention and a shameful distortion’.

He said: ‘Aslan is clearly established from the very beginning of the whole cannon as being a Christ figure. I can’t believe that Liam Neeson is so stupid as not to know.’

I am in full agreement with William Oddie and Mr. Hooper.

Before the first movie - The Chronicles of Narnia: The Lion, The Witch, and The Wardrobe - was released, Christopher Morgan of The Times points out an unpublished letter which was sent to a child fan from the masterful author himself in which he wrote: “The whole Narnian story is about Christ.”


The letter, written from Magdalene College, Cambridge, where Lewis was a don, contradicts this. “Supposing there really was a world like Narnia . . . and supposing Christ wanted to go into that world and save it (as He did ours) what might have happened?” he wrote.

“The stories are my answer. Since Narnia is a world of talking beasts, I thought he would become a talking beast there as he became a man here. I pictured him becoming a lion there because a) the lion is supposed to be the king of beasts; b) Christ is called ‘the lion of Judah’ in the Bible.”

Labels: Aslan, Christ figure, Liam Neeson, Mohammed, Narnia, symbolizes Christ, The Chronicles of Narnia, The Lion the With and the Wardrobe, The Voyage of the Dawn Treader

Back in 7th grade when I first read the Narnia books, I was a little creeped out. I was thinking "I dunno about this, they're making this cat out to be some kind of wannabe Jesus." Little moron that I was, I thought it could be a sin to compare Christ to a cat or something. Then it was explained to me that CS Lewis was a Christian and that Aslan was a Christ figure ON PURPOSE and the whole thing made more sense.

I guess me in 7th grade has more of a clue than Neeson has today.

When I was much younger, I read--and was captivated by--Lewis's The Screwtape Letters and also Perelandra.

C.S. Lewis is a giant among Christian authors, and that is now, and never has been, a secret.

I always wondered how Hollywood managed to bring themselves to actually making this Christian children's classic into a film. Liam Neeson, I suspect, is trying to divorce himself from association with a film based on Christian theology. Maybe he's angling for a part produced by Islamic $$$.

I've never read the books. I've never seen the movies (other than to sit with the kids for ten minutes while they watched a segment).

HOWEVER, there are lots of people who watch movies for symbolism (ie NEO is Christ - in THE MATRIX) and some watch them because the stories reflect something interesting that the author drew from Christian tradition.

I saw all of the Harry Potter movies with my children and my dyed in the wool radical fringe "Christian" relatives swore that I was leading my children to HELL.

So my position on the whole movie thing is neutral.
CS Lewis films, The Matrix, Harry Potter, etc.

Liam is a twit

Mohammed was not a gentleman. Jesus was. Aslan is written that way.

Anybody who says Aslan is Mohammed-ish is undereducated.

Liam Neeson obviously hasn't a clue about CS Lewis and what he was all about. If he did, he wouldn't make such silly statements.

LL summed it up for me, pretty much the same expierence.

Actors/actresses are by and large attention-hounds. If they weren't, they wouldn't be actors/actresses. And what's the quickest way to get attention? By saying/doing something so outrageous that everybody picks up on it. Since a lot of (liberal) Hollywood movies are tanking (and conservative movies are banking), the liberal Hollywood set may be feeling a bit, shall we say, left out; this might explain the truckloads of 'are-you-out-of-your-mind?' statements and actions we're seeing.

That or there's something in California water that's turning them all into lunatics.

Daughter of the Most High said...

“Teacher, which is the greatest commandment in the Law?” Jesus replied: “‘Love the Lord your God with all your heart and with all your soul and with all your mind.’38 This is the first and greatest commandment. 39 And the second is like it: ‘Love your neighbor as yourself.’ Matthew 22:36-39... Perhaps instead of tossing this about pray for Liam and show him the grace God's shown everyone of us. Pray that His truth will prevail and that others will come to know it as such. That would be a good place to begin :O)

If he thinks that, I wonder what his take on "The Last Battle" would be.

You've all failed to spot that Neeson says that this is how he feels personally - he's not stating that that was Carrol's intention. Any research would confirm that we wanted Aslan to resemble Jesus - slamming him for his personal opinion but remember that it is just that. An OPINION. The author even states that before the quote: "with his interpretation of Aslan" HIS interpretation, not fact.

Personally I see Jesus, but you could argue that Aslan is more of a spiritual figure in general. He isn't ACTUALLY jesus - he just resembles him. (Have to agree about Mohammed though - no way)

I think alot of American christians (I'm assuming evangelicals of some flavour?) forget that faith isn't as rabid over here in the UK.

Lewis was an Anglican (Church of England) not Catholic.

Not sure what you mean by "rabid" but Lewis has written book after book of theology soaked books and made it pretty dang clear what he believes.

I could be mistaken but I think he wrote them to his niece to equip her with a better understanding of deep theological beliefs that she could still see at a younger age. (could be wrong about this tho)

"Not sure what you mean by "rabid" but Lewis has written book after book of theology soaked books and made it pretty dang clear what he believes."

Could you please point out where I stated "rabid"?

What i find funny is that people get angered by what others believe. If Liam Neeson wishes to believe that then let him believe that, C.S. Lewis said many times through out his life that people are not going to see the world the way he does and that we can not be angered but be understanding with love. To call some one names because they do not see or believe the same way is not what Christ would want us to do. Love thy neighbor and don't throw stones.