Official Endorsement: I Endorse Rick Santorum for President of the United States of America

Rick Santorum is a stalwart in the movement to stop jihadists and Islamofascists from committing terrorist acts. He has both the moral clarity and a great economic vision which will lead us out of this economic calamity which our country is enduring today. He understands the threat that Islamic Jihadists pose to our country today. We cannot be isolationist and think that if we simply leave our enemy alone they will stay put and everything will be okie dokie. To think that, you must be living in some type of fantasy land. Do you really think that if we had left Hitler alone that he would have just been content with having control over most of Europe? Hitler clamored for more power and thus would have spread his territory farther and wider across the globe.


Rick Santorum knows that the family and economics are interconnected. The morality of the family can very much affect our economics. As you have seen the decline of moral values within the family you have also seen a decline in income within both the lower and middle classes. He is committed to securing the border. He is proud to stand and defend Israel from her enemies, like Iran. He has vowed that under no circumstances can we allow Iran to attain nuclear capabilities.


He has been, is, and will continue to be tough on Islamic terrorism - a member of the anti-jihad movement.


Zilla, one of our great anti-jihad bloggers, has also endorsed Rick Santorum for President of the United States.


Obama has consistently enabled the Jihadist movement.  His policies have been disastrous and harmful to the Middle East, especially Israel. Zilla points out the intentions of the Muslim Brotherhood with regards to the West, including the United States.  This is their own words:


The Ikhwan [Muslim Brotherhood] must understand that their work in America is a kind of grand Jihad in eliminating and destroying the Western civilization from within and "sabotaging" its miserable house by their hands and the hands of the believers so that it is eliminated and God's religion [islam] is made victorious over all other religions.

Here is the official Muslim brotherhood motto (in their own words):


Allah is our objective. The Prophet is our leader. The Qur'an is our law. Jihad is our way. Dying in the way of Allah is our highest hope.

Zilla has posted a portion of a speech in 2007 that Rick Santorum gave on Islamic Fascism.


"They want to conquer the world for Islam because that's what their book says."Santorum criticized President Bush for "misdefinition of the enemy" and poor communication for terming the struggle a "war on terror.""Terror is a paramilitary tactic," Santorum said. "It's like calling World War II a war on blitzkrieg. … Why have we not said this is a war on an ideology?"Santorum called for political liberals to support the war on radical Islam, pointing to the vulnerable status of women and homosexuals in Islamic countries as evidence that liberal ideals of feminism and gay rights are particularly threatened."There is a lot of common ground here," Santorum said. "When you look at this enemy and who they are, there is much more for liberals not to like about them than even for conservatives not to like. Liberals want a secular government. Let me assure you, radical Islam is not about secular governments."Being called to the challenge of confronting an evil ideology "is not new for America," Santorum said. Americans have also been hesitant to fight, he said, likening American reluctance to come to the defense of its allies in World War II to the public's current ambivalence about the war in Iraq.Like Britain in 1940, America is currently standing alone against a threat - this time from the Islamic world - without the aid of its traditional allies, Santorum said. "Europe is hardly Europe anymore," he told the audience. "Europe will not fight."

"(Islamic radicals) will not leave us alone," he said. "My plea to you is to engage that battle now.""When we are fully engaged in this battle," Santorum added, "we will re-examine ourselves, because we will be fighting an enemy that fundamentally… sees the world differently than we do."

You can see the entire speech here.  Zilla has more great videos of Rick Santorum, information on the un-indicted co-conspirators Muslim Brotherhood and CAIR which exposes their nefarious intentions and endgame for the United States and what may result if we give into dhimmitude, and she has additional great information exposing jihadists so go check out her latest article and the rest of her blog postings.


Good news! - Pamela Geller has informed us that the ninth circuit court has upheld the Holy Land Convictions and now the terrorist organizations must be prosecuted by the DOJ.


Stacy McCain has announced some very important endorsements of Rick Santorum. One is the billionaire, Foster Freiss and the other is Iowa's Secretary of State, Matt Schultz.
From Foster Freiss:


Rick Santorum is willing to put country ahead of himself and bear the political consequences...

Recent kind comments by Sarah Palin and Glenn Beck affirm his ability to ignite the all important voters who believe our country is facing a decision between being governed by rules and regulations or inspired by values and virtues.The energy and enthusiasm and dedication he exhibits can best be demonstrated by his visiting all 99 Iowa counties and moving his entire family to Iowa for seven weeks to let people assess who he really is and to see him up close and personal rather than through the gloss of television messaging. . . .

From Matt Schultz:
Iowa Secretary of State Matt Schultz will endorse Rick Santorum for president on Friday, he told The Des Moines Register . . .Santorum promoted this coup [Thursday] by saying he’d have “a major announcement” during a campaign stop in the Des Moines area at 6 p.m. Friday. . . .Schultz, who backed Mitt Romney four years ago, is one of the only statewide elected officials in Iowa to publicly back a GOP candidate this election cycle. . . .Schultz, a 32-year-old Council Bluffs Republican, stayed neutral through the early stages of this presidential selection process because he supervised the ballots for this year’s Republican straw poll on Aug. 13 in Ames. 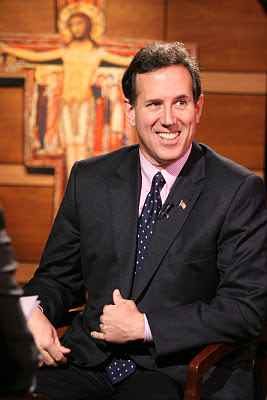 Thanks for linking my post, Teresa, and you've got a heckuva great post right here too! Glad to be on the same team, my friend!

Like you Teresa, I would love to see Rick get the nomination! But for now I will not support any of the field. My heart would go to Rick, but that old stupid brain of mine has certain doubts---sure you understand.

I'd be happy to vote for him. It looks more like they will pick someone I can't vote for. And, yes, like McCain, most of the field would not get my vote. Better to have a real Zero than one of "ours" to do the same things. I simply can't vote for a big government social liberal again. Not after Bush's two runs.

I sure hope Rick gains some steam.