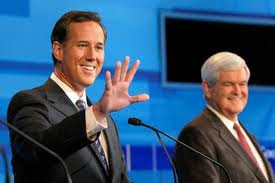 I found out this bit of news from The American Catholic.  Like them, this surprised me since I had noticed a bunch of Pro-Romney pieces over at the National Review.  Today the National Review has taken a bold move and requested that Gingrich drop out of the race and endorse Rick Santorum.  With Santorum's rise in popularity and continued surge, and Gingrich's implosion I think this is a good idea.


It isn’t yet a Romney–Santorum contest, but it could be headed that way. We hope so. Gingrich’s verbal and intellectual talents should make him a resource for any future Republican president. But it would be a grave mistake for the party to make someone with such poor judgment and persistent unpopularity its presidential nominee. It is not clear whether Gingrich remains in the race because he still believes he could become president next year or because he wants to avenge his wounded pride: an ambiguity that suggests the problem with him as a leader. When he led Santorum in the polls, he urged the Pennsylvanian to leave the race. On his own arguments the proper course for him now is to endorse Santorum and exit.

Santorum has been conducting himself rather impressively in his moments of triumph and avoiding characteristic temptations. He is doing his best to keep the press from dismissing him as merely a “social-issues candidate.” His recent remark that losing his Senate seat in 2006 taught him the importance of humility suggests an appealing self-awareness. And he has rightly identified the declining stability of middle-class families as a threat to the American experiment, even if his proposed solutions are poorly designed. But sensible policies, important as they are, are not the immediate challenge for his candidacy. Proving he can run a national campaign is.

Santorum is now leading Romney in the polls in Michigan.  This is good news. Gingrich seems to have a lot of antipathy for Romney so I have a feeling if Santorum continues his surge and Gingrich continues to do poorly than Gingrich will drop out and endorse Santorum.
From The Guardian:
A Pew Research Center poll taken this week puts support for Santorum among Republican voters at 30%, two percentage points ahead of Romney. A month ago, Romney held a 31% to 14% lead over Santorum.
A Public Policy Polling (PPP) survey released on Monday showed that Santorum has taken a significant lead in the Michigan primary in a fortnight. Santorum is at 39%, 15 percentage points ahead of Romney. The numbers are a stinging blow to Romney because he was born in Michigan and his father was governor of the state.
Posted by Teresa at 2/13/2012 05:28:00 PM

That would be a good call for Newt. He's flailing away now. If his supporters when to Santorum, that would be quite a boost.

If Santorum smacks down Romney in MI he is toast IMO.